Helsinki as a capital city

Helsinki was founded in 1550 by state decree and its most important characteristic has ever since been a close relationship to the state. The foundation of Helsinki was prompted by the commercial interest of the Swedish realm, and the aim was to make the city large and mighty – even though this entailed that burghers from other towns were ordered by the King to move to Helsinki. That particular project failed, but Helsinki survived and eventually thrived in the 17th century as an important transfer port for troops, horses and supplies for the long wars in Livonia and Poland (as shown by Seppo Aalto in his book Sotakaupunki, ‘The War City’).

Helsinki was founded in 1550 by state decree and its most important characteristic has ever since been a close relationship to the state. The foundation of Helsinki was prompted by the commercial interest of the Swedish realm, and the aim was to make the city large and mighty – even though this entailed that burghers from other towns were ordered by the King to move to Helsinki. That particular project failed, but Helsinki survived and eventually thrived in the 17th century as an important transfer port for troops, horses and supplies for the long wars in Livonia and Poland (as shown by Seppo Aalto in his book Sotakaupunki, ‘The War City’).

In the following century when Russia had, after territorial conquests in 1710–1714 and the peace treaty of Uusikaupunki in 1721, become a powerful state in the Baltic Sea region and master of the southeast and southern shores of the Gulf of Finland, Helsinki became significant for Swedish war strategy. The motive of the Government was defence against Russian expansion but, even more importantly, a desire of revenge: to take back provinces lost to Russia (Karelia, Ingria, Estonia and Livonia). Sweden had also wider ambitions, together with Turkey, which attacked Russia from the south. The most important manifestation of these plans was Viapori (Swedish: Sveaborg, later in Finnish: Suomenlinna), a large coastal fortress complex built in 1748 and onwards with important financial contributions from France. The construction project – which would have seemed rather grandiose at the time, or in any time – was an enormous investment part of which benefited the merchants and other inhabitants of Helsinki. Once again, Helsinki was dependent on the large projects of the state.

The importance of the state to Helsinki reached its peak in the early 19th century when Russia had conquered the territory of Finland and formed a new autonomous state, the Grand Duchy of Finland, within the Russian Empire. Finland became a military security zone for Russia and its capital Saint Petersburg. Several garrisons were set up in Finland, and its most important military establishment was Viapori (albeit the Bomarsund fortress in the Åland Islands was of similar importance, but only for a short while). The fortresses and garrisons functioned directly under Russia’s state administration, whilst civilian matters were delegated to administrative bodies specific to the Grand Duchy, together with the sovereign in Saint Petersburg.

The question of a capital or administrative city was first discussed at the Porvoo diet in 1809, and already at an early stage, certain groups saw Helsinki as a potential monument for Alexander I, the conqueror and benefactor of Finland, and even proposed renaming Helsinki ‘Alexandria’. Only in 1812, when Russia and Sweden had reached agreement on the stableness of the common borders and on the existence of the Grand Duchy of Finland, was the Emperor ready to decree, on 8 April 1812, that Finland would have a capital of its own and that this status would be given to Helsinki. The decision was influenced by count G.M. Armfelt, the chargé d’affaires for matters concerning Finland.

Helsinki was the best alternative for three reasons. For one thing, its position along the Gulf of Finland was unique both militarily and commercially in the sense that it had a large and deep roadstead, the Kruunuvuorenselkä, sheltered from storms by Viapori and other islands; and at the same time it had fast access to the open sea. A great asset was, of course, the fortress itself which, in turn, needed the merchant town for its provisioning. Another reason was that in autumn 1808, a fire had devastated much of the city, which would in any case have to be rebuilt and made representative again. A third, ideological factor important to Armfelt himself was that Finland should have a new centre releasing it from the historical ties to Sweden and also expressing and construing in every way the new statehood. Finland’s largest town in those days (before the great fire in 1827) was Turku, but it was crowded and labyrinth-like and could not be transformed into a monumental, symbolically important city. Moreover, the general atmosphere in Turku was conservative in favour of the traditions and rights of the Swedish rule.

The decision in 1812 led to a completely new kind of town planning under the direction of Councillor of State J.A. Ehrenström, who had been appointed the leading planner of Helsinki. Armfelt and his successors managed to acquire the financial means for the implementation of the plans by stretching the budget of the Grand Duchy to its limits. In accordance with Ehrenström’s plan, a square pattern with very wide streets and large squares was blasted into the rocky terrain of Helsinki. In the only valley of this headland stretching out into the outer archipelago, a boulevard, the Esplanadi-Bulevardi stretch, was planted. With the exception of Berlin and Milan, it had almost no precedent in the Europe of that day. It took hundreds and hundreds of barrow, cart and sledge loads of landfill to turn the partly shallow and muddy bay off the town – still in its natural state – into an enormous, entirely paved Market Square reaching out into deep water. The draining and filling of Kluuvinlahti bay where the Rautatientori (Railway Square) was subsequently built would not be completed until decades later.

Ehrenström sketched an Emperor’s Residence to provide a large symbolic building for Helsinki, much the same as the Royal Palace in Stockholm. It would have stood in the Kruununhaka district behind the present-day Meritullintori square, with a large ‘palace square’ and an extensive park in the whereabouts of present Säätytalo (House of the Estates) square. Following the overall change in European politics in 1819, no monumental residence was ever built in Helsinki, because the Emperor did not intend to stay in Helsinki other than occasionally. Thereby the importance of another square grew – the Senate Square, which was already being paved on the grounds of the old Suurtori (‘Great Square’). As early as the mid-1820s, the Ulrika Church was moved from the Senate Square to its current Bulevardi location, and in the late 1820s, the main building of the University (transferred in 1828 from Turku) began to rise as a counterpoise to the Senate Building across the Senate Square. Thus the Senate Square came to assume the role of a monumental centre. In 1830, the decision was made to start building the St Nicholas Church as the ideological, architectural and optical focus of the square. The work on the foundations of the church was very demanding, but it would become (instead of the Emperor’s Residence that was never built) Helsinki’s largest and most spectacular building and a symbol for the city.

The Senate Square thus became the concretisation of the central administration, the spiritual being and the identity of the Grand Duchy of Finland – and the State of Finland – and it was symbolically presided over by the church.

In the milieu of the university, an ideology of Finnish identity sprung forth from intellectuals like Runeberg, Lönnrot, Snellman, F. Cygnaeus and Topelius. This ideology was spread throughout Finland by graduates from the university, and a vibrant printed press took shape in Helsinki. Meanwhile, Turku was still very important for commerce and journalism, but certain political developments in the 1860s decisively consolidated Helsinki’s leading position. The first regular session of the Diet of Finland in 1863 was opened in Helsinki by the Emperor Alexander II in person. Another important reform was the railway policy of the same Emperor, which made Helsinki (and Saint Petersburg) the focal point of the Finnish railway network.

Thus at first, the aim was to construct Helsinki not only as a monument for Emperor Alexander but above all the symbol of an entirely new Finnish state and nation. The grandiosity of the city plan was worthily complemented by the monumental buildings designed by architect C.L. Engel; garrisons, churches, Senate Palace and General Governor’s Palace, and the Main Building of the University with many adherent buildings including a very elegant large library. The example of the uniformly Classicist architecture of the public buildings was followed in every way in private construction of stone and wooden houses.

Helsinki both expressed and created at first Finland’s statehood and later its national-ideological existence. Finland became a centralised state where the leadership of administration, education, politics and, gradually, trade and industry was concentrated in Helsinki. When the Russian Revolution separated Finland from the Russian Empire, the highest political leadership moved to Helsinki in 1917–1918. The armistice of 1944 further increased Helsinki’s importance, since Viipuri, the biggest city in Eastern Finland, remained behind the new border, and Helsinki inherited a large proportion of its sphere of influence. Not many countries comparable with Finland experienced this kind of concentration of influence and power. Helsinki’s position with regard to the whole country is exceptionally central and all-encompassing.

Matti Klinge is Professor Emeritus of History at University of Helsinki. 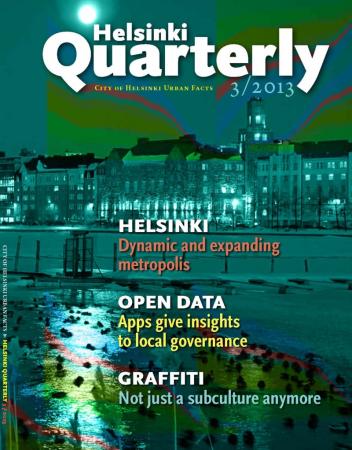