A new security survey shows that the residents of Helsinki consider their own neighbourhood, the city centre and public transport safer than in any previous similar study. This article looks at the respondents’ assessments of the current safety situation as well as its development during the past three years.

Perceived security has emerged as an independent field of research during the past few years. Helsinki has monitored the development of its residents’ experiences of safety since 2003. The city has conducted regular surveys on the issue together with Helsinki Police Department (see e.g. Tuominen 2010, Laihinen & Tuominen 2013, Keskinen & Laihinen 2017). This article is based on the results of the latest survey from October 2018.

The previous round of surveying in late 2015 was conducted amid unusual circumstances, as the Paris terror attacks and the rapid increase in the number of asylum seekers entering Europe had given rise to widespread concern. Opinion polls and headlines in the tabloid press, the turmoil on social media and the establishment of citizen street patrols reflected people’s fears.

In spite of all this, Helsinki residents’ perceptions of security were shown to be mainly on the same level as in the previous survey three years earlier. While the respondents assessed the current security situation in a fairly positive light, they were more pessimistic in viewing how it had developed in the past three years. It is possible that the public debate concerning crime and insecurity has influenced citizens’ views on the latter question but not the former. This apparent contradiction is repeated in the 2018 survey and will be discussed later in the present article.

To broaden the respondent base of the City of Helsinki Security Survey, a separate sample of non-native residents was included in 2015. The emphasis of this article is on comparing the results of the 2018 and 2015 surveys, which allows us also to form a picture of how the non-native population’s views on security-related issues have developed over the three-year period. Longer time series will also be presented based on the information given by the Finnish- and Swedish-speaking respondents.

One of the most commonly used security indicators is how respondents perceive the state of security in their own neighbourhood late on weekend nights, as well as the corresponding question about security in the city centre. The neighbourhood is understood as referring to the immediate surroundings of the respondent’s home – the area where they move about on a daily basis.

The perceived security of one’s own neighbourhood is a key factor of liveability in the everyday life. Helsinki uses its residents’ perceptions of safety in their own neighbourhood late on weekend nights as one of the monitoring indicators of the City Strategy.

Comparisons between the security surveys of 2015 and 2018 are possible for respondents aged 15 to 74, since people aged over 74 were not included in the sample of the previous surveys (2015 or earlier). In the 2018 survey, a greater share of the respondents feel that their own neighbourhood is safe than in the last study three years ago (see table 1). The answer option not applicable typically refers to those respondents who, for one reason or another, do not go outdoors at night.

Table 1. Perceived security in the respondent’s own neighbourhood late on weekend nights in 2018 and 2015, all 15–74-year-olds

The time series from 2003 to 2018 reveals that the share of those who feel safe in their neighbourhood has increased over the fifteen-year period (Figure 1). However, male and female respondents’ experiences of neighbourhood safety remain persistently different. Men are about twice as likely as women to perceive their neighbourhood as completely safe. Nonetheless, women’s perceptions of neighbourhood safety have improved consistently since 2012. In the 2015 survey, men’s perceptions had been less positive than three years earlier, but they are now at a record-high level in the latest data from 2018.

Perceptions of security in the centre of Helsinki

From the perspective of the vitality and attraction of a city, the ability of people to move without fear in the city centre is of utmost importance. The centre of Helsinki is now perceived to be slightly safer on weekend nights than in the previous study three years ago (65% of respondents, up from 58.5%). The feeling of unsafety has decreased most significantly among the non-native respondents. However, they also had a somewhat higher percentage of ‘not applicable’ or ‘no opinion’ replies, which may indicate that they are generally less accustomed to being in the city centre at night-time. The data does not tell us whether this has to do with intentional (safety-related) avoidance of the city centre after dark.

Figure 2 presents a time series (2003 to 2018) on how the Finnish- and Swedish-speaking respondents perceive the state of security in the city centre. This shows that the share of those who feel safe or fairly safe in the city centre has increased over time, with both men and women.

One of the strategic aims of Helsinki is to be a diverse and internationally attractive city for culture, sports and events. The latest survey inquired, for the first time, whether the residents of Helsinki felt safe in the various public events organised in the city. The safety of public events is related to the previous discussion since many events – especially larger ones – are organised in the city centre or inner city. 77 percent of the respondents reported that they felt safe in public events, against only 6 percent who felt unsafe. The other 17 percent had not attended public events recently or had no opinion.

A question on the perceived safety of public transport vehicles in Helsinki has been included in each survey since 2003. Part of the respondents do not use public transport late at night. In the 2018 survey, 10 to 24 percent (depending on the means of transport asked) reported that the question was not applicable.

Figure 3 demonstrates that the perceived safety of all the four means of public transport has improved since the previous studies in 2003–2015. For the sake of comparability, the figure only includes those Finnish- and Swedish-speaking respondents, aged 15 to 74, who reported using the means of transport in question also late on weekend nights. The results improved most noticeably during the two most recent survey rounds. However, one in four respondents still regard the metro and the local train as unsafe environments at night-time.

A contradiction between general perceptions and the views on recent security developments?

Another question in the Helsinki Security Survey asks the respondents to assess the development of the security situation in the city in the past three years. The answer options are that the situation is unchanged or that the city has become safer or less safe (either considerably so, or to some extent). In the 2018 survey, the most supported view was that the situation had remained unchanged. Nonetheless, according to one in four, the city had become less safe, while one in five said they were unable to assess the development.

Table 4. Development of the security situation in Helsinki in the 2018 and 2015 surveys, 15–74-year-old respondents

The long time series (Figure 4) reveals that a certain degree of pessimism about the development of urban security has been expressed by the respondents in the consecutive Helsinki Security Surveys. In each study between 2003 and 2015 the respondents who feel that the city has become less safe have been more numerous than those with the opposite view. Each time, the most supported view has been that the situation has neither improved nor deteriorated. In the 2015 survey, the respondents were more pessimistic about the development than in the other survey years. At the time, the rapid rise in the number of asylum seekers had caused a fairly exceptional political situation in Europe, and it is possible that such concerns were also reflected in the opinions of the Helsinki survey respondents.

This observation seems to contradict the point made earlier in this article that Helsinki now performs better on some key indicators (perceived night-time safety in the city centre, neighbourhoods and public transport) than it has done in any of the previous surveys.

The authors of the 2015 survey report sought to explain the apparent contradiction by pointing out the different focus and phrasing of the questions on which these results are based. The way the respondents perceive their everyday security – particularly in their own neighbourhood – is largely rooted in personal observations. The views on the recent development of the city’s security situation, on the other hand, may be at least partly based on media reports or expert opinions heard by the respondents. International crises and threats such as terrorism may serve to increase people’s sense of uncertainty and insecurity and this is possibly reflected in the assessments (Keskinen & Laihinen 2017).

The general feeling of safety has improved in Helsinki. Residents now perceive their own neighbourhood, the city centre and the means of public transport to be safer than before. According to the survey question that asked the respondents to assess the general security situation at the moment of completing the survey, 92 percent were of the opinion that Helsinki is a safe or fairly safe city. The corresponding result in the latest Stockholm security survey was 93 percent (Trygghet i… 2017).

There are noticeable area-based differences in perceived security within Helsinki. In other words, people living in different neighbourhoods do not experience the safety of their daily surroundings in a similar fashion. In this regard, there have been positive developments compared to the previous surveys – the area differences appear to have narrowed down somewhat. These questions will be discussed in a forthcoming article, to be published on the Kvartti.fi website (see Keskinen & Pyyhtiä, 2019, forthcoming, in Finnish). Other results of the security survey not covered in the present article will also be dealt with in a series of online articles in 2019.

Vesa Keskinen is Researcher in the Urban Research and Statistics Unit at the City of Helsinki Executive Office. 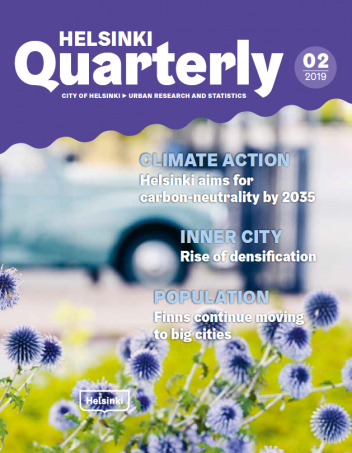