Urban prose fiction has in recent years found its way in academic studies in Finland. Urban literature dealing with urban topics has been a growing area in literary studies, but it has also started to be of interest for historians, geographers, planners and others who are interested in the various themes that urban literature embraces, such as narrative forms, literary and cultural mapping, urban imagination, or urban emotions and experiences. Interdisciplinary urban literary studies bring together interpretations and understandings of the complexity of the urban milieu and the rich variety of urban writing. Urban literature appeals to those interested in urban imagination and urban future, as well as urban history.

Modern urban literature has a strong tradition in European cities. European capital cities each have their own literary traditions contributing to the particular urban cultures in each respective city, but the traditions are also connected to each other. Thus, the idea developed by Honoré de Balzac (1799-1850) in his La Comédie Humaine, that capitalism destroyed the old aristocracy, and the transition from agrarian to an urban world created new social forces and, as a result, new human types (Lehan 1998, 57) that literature should explore, has had different literary consequences in different urban milieus. Urban literature is always connected to the physical, material cities, although the connection is not a straightforward one.

Some of the most distinguished contemporary Finnish writers, for example Kjell Westö, who writes in Swedish, are urban writers. Nevertheless, the tradition and history of Finnish urban literature has received notably little attention, although recent studies show that Helsinki has a flourishing tradition of urban literature (Ameel, 2013). Some of the urban writers in that tradition are household names, such as Mika Waltari or Maila Talvio, but a lot of urban literature has simply been forgotten by academics and the reading public alike. Urban Helsinki is depicted in many genres of literature that are also common in European urban literature. A persisting and a well-known genre has been the young-man-from-the-provinces novel. Juhani Aho’s Helsinkiin (To Helsinki, 1889) is an early example of this.

One of the undeservedly forgotten authors of Helsinki is Toivo Tarvas (1883–1937), who wrote several novels and collections of short stories about people and life in Helsinki. In the first decades of the twentieth century Tarvas was one of the very few Helsinki-born writers. Of the urban writers of the time he was the one who in his writings presented the most socially – and geographically – varied palette of people from all walks of life. Compared to many other urban Finnish writers Tarvas was at ease in all parts of the city. His characters move from the city center to the working class neighborhoods across the Long Bridge that separated these two areas.

Also the characters in his novels are mostly Helsinki born urban dwellers that do not enjoy forests or staying in the countryside. In this they are probably an exception in the Finnish literary history. For example in a short story called “Lumottu” (Enchanted), the main character tries to escape his personal problems in the forest. But nature does not bring him relief from the troubles created in the society. His condition becomes worse as he travels  north, and in the end he commits suicide. This is a rare solution in Finnish literature, where the forest is usually a place for freedom and safety.

Tarvas’ collections of short stories Häviävää Helsinkiä (Disappearing Helsinki 1917) and Helsinkiläisiä. Piirroksia pääkaupunkilaisten elämästä (Helsinkians 1919)  comprise stories of ordinary people and everyday life in the capital city around the time of Finnish Independence. The works of Tarvas are especially interesting for urban historians, because they offer observations of a city undergoing changes that affect both people and the urban milieu. Tarvas has a sensible eye for subtle changes in the urban environment, which he often depicts as perceived with multiple senses. In a story called “Antti Pelttari“ a blind old soldier spends his days selling tobacco at the southern end of the Long Bridge and can only hear the sound of the changes in the city around him; the soundscape of modern traffic and the  steel  structures of the new bridge that had replaced the former wood-built one, but also the speed of modern life.

Some of the short stories have a warm and reassuring atmosphere, but the most prevailing feeling in Tarvas’ literary works of  is  nostalgia mixed with melancholy, which is a common topic in urban European literature. Continuous destruction, construction and reconstruction have marked European cities during the last century, and art and literature has often been the place where the meanings of the urban changes have been interpreted.

Climbing up the social ladder might be a welcomed change, especially if it means escaping poverty, but it does not necessarily lead to happiness. In many novels of Toivo Tarvas the characters have succeeded in life financially and socially, but they seem to have a special sensitivity over the changes in the urban milieu. Most of his novels are quite melancholic and the feeling of loss is  tangible, as in the short story “Kahviputka“ (“The Coffee Shed”) about a man who knows all the old places for drinking, but when he comes to the city after being away for a while, they have all vanished with the introduction of the Prohibition in 1919.

There is no single way to use urban literary fiction as a source for research in history. Literature’s referentiality to the historical world can be a complex one, but to historians urban literature can provide a way to explore urban experience and urban change in a subtle, if not an exact, way. This can be compared to Franco Moretti, writing about Daniel Defoe’s Robinson Crusoe, sees the novel being about a man who lives on an island and is disembedded from mankind, but who gradually starts to see a pattern in his existence and finally finds the right words to express it (Moretti 2014, 13).

A city does not provide a place for a similar isolation as in Crusoe, but urban literature is also often about loneliness, unsure identities,  or people who are trying to fit in the city, to quite literally find their place in the city, socially, culturally and geographically. This is indeed the case of Toivo Tarvas, whose characters are often working-class people struggling to survive the harsh conditions of urban existence, or trying to alter the conditions of their living. Many of his novels deal with the Finnish Civil War that disintegrated not only the society but even families. In the novel Velisurmaajat. Vallankumousromaani (Fratricides. A novel about the revolution 1917) two brothers are politically on opposing sides and end up fighting against each other during the war. In the novel the civil war is essentially urban. The friction between the brothers derives from their different living conditions, which are minutely described both inside and outside. The street addresses are important – the wealthy, educated brother lives on the bourgeois Pietarinkatu street and the Marxist brother, an unemployed filer, on the working-class Agricolankatu. The street addresses in the novel function not only as indicators of place, but more of social status and opportunities, or the lack of them. Thus, Tarvas writes about the civil war as a quintessentially urban question.

One of the fascinations of reading historical urban literature resides in how it lets us wander in familiar places that have forever changed. Through this quality, it expands our spatial imagination. This might explain why urban literature appeals to architects, planners and other people whose work deals with the spatiality of cities. It has also been argued that reading urban literature is similar to ‘reading cities’. Both types of reading are based on culturally specific ways of interpretations that are not inborn skills. Literary techniques that point to the historical layers of a city can make us understand how urban spaces are also lived spaces that shape collective imaginaries. (Huyssen 2003, 7). Urban literature can be a rich source for historians, but joining the literary scholars for a deeper understanding of how literary narratives work can be a fruitful way to practice interdisciplinarity.

In Finland a multidisciplinary group of literary scholars, historians, and planners has been convening for a few years now. The Association for Literary Urban Studies is an open forum for everyone interested in urban literature. The aim of the association is to enhance interest in literature written in all languages and encompassing all historical periods. http://blogs.helsinki.fi/hlc-n/

Silja Laine has PhD in cultural history. She is currently working at the University of Turku.

Huyssen, Andreas 2003: Urban palimpsests and the politics of memory. Cultural memory in the present. Stanford.

Lehan, Richard 1998: The City in Literature. An Intellectual and Cultural history. University of California Press.

Moretti, Franco (2013) 2014: The Bourgeois between History and literature. Verso. 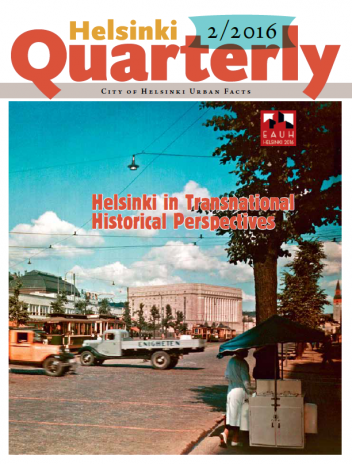