Interview: The digitised city is a goldmine of data and information

The digitisation of cities can open up unforeseen opportunities from which we must learn to benefit, says Timo Cantell, new editor-in-chief of Kvartti and director at City of Helsinki Urban Facts since April. As a city department specialised in data and information, Urban Facts is strategically placed to follow the developments.

”We monitor the various urban phenomena in the surrounding city and we collect, store and analyse information. In southern Europe, a facility like ours might be called an urban observatory."

”Part of our job is to tailor this data into various analyses and other information products to be utilised by the city management, residents or virtually anyone else. This enables the City of Helsinki to be strategically aware of its state and development and the changes therein."

According to Cantell, the fact that his department is situated in a building called the Round House in Helsinki's Kallio district is symbolic in itself. The windows of the fifth-floor offices offer an almost complete 360-degree view of the surrounding cityscape.

”Due to the nature of our activities, which include providing all the city departments with statistical and research knowledge and document storage expertise, we are in fact an exceptionally well-networked unit within the city organisation."

As a city department, Urban Facts is one of the smallest in the City of Helsinki administration. However, few cities in Finland or even elsewhere in the world can boast a research facility of comparable size.

Cantell claims that this testifies to Helsinki's long-term commitment to exploiting city data in decision-making. ”Helsinki is one of the leading cities in data-driven management."

The Urban Facts department celebrated its centennary four years ago. Its predecessor, the City of Helsinki Statistical Office was founded in 1911.

”Part of the statistical series maintained by the city run even further to the past. The earliest were established already in the 19th century."

Timo Cantell is fond of the thought that Urban Facts has a 500-year perspective on the city that its duty is to describe. The Helsinki City Archives forms a part of the department, and the oldest document stored there is the letter of privileges by King John III to the burghers of Helsinki in 1569.

”Although the most part of our statistical and research activity is focused on the present day, we also produce for instance a population projection until 2050."

”Another field where we have to be far-sighted is electronic records management. As we are the authority in charge of the City Archives, this means that we have to ensure that our historical documents as well as today’s local administrative records will be maintained in good shape till far in the future. It is about fostering our cultural heritage."

Today, information is in an electronic format and it is created in ways that differ remarkably from those of the past.

”I am confident that digitisation will open up new opportunities for cities and also for us,” states Timo Cantell.

A digitally networked city engenders huge quantities of data every day, stemming from various sources such as mobile devices and sensors or the information systems related to local public services. Part of all that data can be harnessed by the city administration, part of it belongs to the private sphere.

”We are not yet fully aware of all the ways in which these vast data flows could be utilised by the city to produce benefits for the residents."

”As a department of information experts, Urban Facts must aim to constantly improve its readiness to identify and access new data sources, as well as to exploit more efficiently the information resources that city itself accumulates,” says Cantell.

”In the future, useful knowledge and insights will be created increasingly by combining data from multiple sources. Another trend is the growing importance of collaboration between public sector experts and private enterprises, universities and research institutes."

Accumulating data is not the be-all and end-all. Researchers and other experts should use the data to be able to better explain and understand different urban phenomena and their causes.

Studying the development of the ’Helsinki–Tallinn twin city region’ is one of the more exciting questions for Helsinki in the present time and near future. ”We wish to collaborate with Tallinn to strengthen our common information basis on this issue."

One of the traditional core tasks of Urban Facts is to have a detailed understanding of Helsinki’s population structure and to make future prognoses for its development. ”This is one of the fields where our expertise is used very frequently for decision-making."

Another forte is the thorough knowledge of Helsinki at the neighbourhood level, including understanding the health and welfare differences between the city districts. Thanks to its long statistical time series and an established research tradition, the department is capable of studying the current changes in these issues in their proper context.

”Understanding urban dynamics is key”, argues Cantell. ”All differences between the districts are not negative, for instance. A certain degree of variance is natural for a dynamic, developing city. But development can also entail certain types of differences that are of a negative kind, and we must be able to identify these."

Harnessing the skills of citizens and public officials

Helsinki is a pioneer city in open data. Timo Cantell has heard such accolades several times from international urban experts, and they were once again confirmed by South American researchers at a reception he hosted in May in connection with a data science conference held in Helsinki.

”They regretted not having similar opportunities in their own cities to make use of data resources produced with public funds."

”The success has not come automatically to Helsinki. It is the result of unwavering support from our council and mayors as well as the persistent efforts of officials."

Cantell remarks that the work is not nearly complete, and the pioneering position can be easily lost without continuous, purpose-driven development.

Until recently, public authorities have developed their information systems, statistics and reports firmly within the office walls. They themselves have also been the main users of the information.

”In the future, citizens must be part of the process where city data is produced. Citizens, private businesses and other local actors will also be encouraged to use all the data for their own best interests and needs. It would be good to know more about the subjective experiences of the citizens and their habits in ’using’ the city”, Cantell explains.

He is also interested in finding ways how the city administration could benefit more from the vast experience of its 40,000 employees. ”They know the city closely and they have an enormous amount of different perspectives to its everyday life."

In order to bring together these enormous data and information resources – whether they be from citizens, enterprises, experts or civil servants – Urban Facts needs to stay well-connected within the city also in the future.

”We must put out feelers to observe the urban life around us, including of course what is going on in the social media and other digital communication channels." 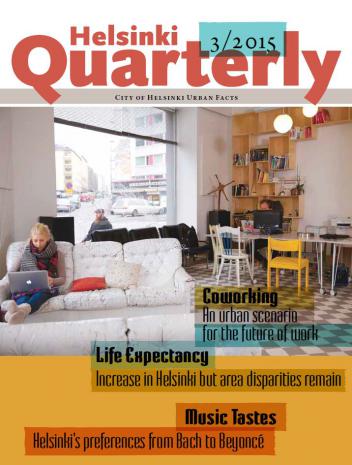