Over the past three decades, Finland has faced two severe economic recessions. The first of these, the recession of the early 1990s, was considered exceptionally severe for its time. The problem was viewed as the consequence of a combination of “bad policy and bad luck” (Honkapohja & Koskela 1999). After the boom period and full employment of the late 1980s, the economy experienced difficulties at the start of the 1990s. The main factors behind the ensuing depression were the fixed-rate policy of the Finnish markka combined with the collapse of the Soviet Union markets and more general economic downturn in other countries. The depression hit quickly and led to mass unemployment. The national unemployment rate rose to a level of over 20 per cent.

If the depression came on quickly, the subsequent upturn was equally sudden. Starting in 1994, economic activity and employment rates began to recover. The upswing was characterised primarily by the rise of the mobile phone industry, led by Nokia and its subcontractors, to become the third pillar of the Finnish economy alongside the metal and engineering industry and the forestry and paper industry. With the exception of the mini-recession at the start of the new millennium, favourable economic development continued all the way to 2008. The unemployment rate, however, never returned to the low level seen during the upturn of the late 1980s.

From the perspective of its background factors and duration, the current recession, which began in 2008, is of a different nature. The subprime crisis of the United States and the euro crisis provide a broader framework, which was combined with explanatory factors stemming from the internal structure of the Finnish economy. The problems and downfall of the Nokia cluster, difficulties faced by the paper industry and, lastly, the decline of trade with Russia, have all played a part in leading to the current recession. In terms of the unemployment rate, the level of 1993 has not been surpassed, but the situation has been very disconcerting in the past few years.

The number of unemployed persons fell briskly between 1994 and 2000. In late 2000, 8.3 per cent of the labour force was unemployed. In 2001, the economy was hit by a “mini-recession”, which is often connected to the bursting of the so-called IT bubble. However, this led to only a minor increase in unemployment. After the mini-recession, economic growth continued to be strong and the unemployment rate in Helsinki fell to the lowest level seen in the 2000s, 6.1 per cent, in 2008. The number of unemployed in Helsinki dropped at this time, on the eve of the global recession, to 19,200 individuals.

The subprime mortgage loan crisis that began in 2007 in the United States led to a broader financial crisis. The filing for bankruptcy of the investment bank Lehman Brothers in autumn 2008 can be seen as a symbol of this crisis. The US financial crisis also had an impact on the international economy. It led to the start of a recession, which also hit Finland. In 2009, the number of unemployed persons in Helsinki grew by 37 per cent compared to the previous year.  Finland reacted to the economic downturn through financial stimulus policy (Kuismanen & Spolander 2011).

The definition of structural unemployment

Long-term unemployed are those continuously registered as unemployed jobseekers for at least one year.

The repeatedly unemployed have been registered as unemployed jobseekers for more than 12 months in the last 16 months. This excludes the aforementioned group of continuously long-term unemployed.

Persons who have remained unemployed after a labour market measure include those people who, over the past 12 months, have been employed, in a work practice/working life training programme, on a probationary period, in labour market training or coaching, working as a temporary replacement for an employee on leave, in an elective study programme or in work rehabilitation activities, whose placement has ended 3 months before the calculation date and who were registered as unemployed jobseekers on the calculation date. These persons are not included in the variables for the long-term or repeated unemployed.

Persons transferring from one service to another include those who have been employed, in a work practice/working life training programme, on a probationary period, in labour market training or coaching, working as a temporary replacement for an employee on leave, in an elective study programme or in work rehabilitation activities, who have been using the above-mentioned services over the past 16 months but whose placement has ended 3 months before the start of the service in effect on the calculation date. In addition, the person must have been registered as an unemployed jobseeker for more than 12 months or have been using the above-mentioned active services in the last 16 months.

This analysis provides a deeper picture of the persistence of unemployment. Comparable statistical data on those who are difficult to employ is available starting from 2006 (Figure 3). In November of 2016, there were a total of 25,900 persons in Helsinki who are considered difficult to employ. The corresponding figure for autumn 2006 was nearly 10,000 fewer. Of all unemployed in Helsinki, the proportion of those difficult to employ in 2016 is as high as 64 per cent.

Thanks to the possibility of temporary employment, persons under 25 years of age are employed from time to time, and they are also more likely to participate in employment services; this can be seen in the high proportion of young people in the categories of repeatedly unemployed and unemployed after labour market services.

The number of persons in Helsinki receiving income support and/or general housing allowance has been growing for several years (City of Helsinki Urban Facts 2015). It is to be expected that with time, persistent unemployment will be reflected in increased experiences of poverty. When unemployment persists, there is also a risk of path dependency, in which persistent unemployment leads to a decrease in professional competence. This leads to even greater difficulty in finding employment and removes the incentive to apply for jobs. Because some persistent unemployment apparently also indicates permanent changes in occupational structure and changing demand for skills, labour market policy must be able to react to these changes. There may not be demand for skills that were previously sought after, even in an improved economic climate.

The structural features of unemployment in Helsinki have been described above. Particularly noteworthy is the growth in long-term unemployment. The depression of the 1990s already demonstrated that even a strong upswing will not necessarily solve all unemployment-related problems. Along with the decrease in quality of life experienced by the unemployed, the increase in structural unemployment poses a significant problem for financing the operations of the public sector. Maintaining the Nordic welfare state requires a high employment rate (Kiander & Lönnqvist 2002). In addition, it must be recognised that the impact of economic growth on increased employment and decreased unemployment may be less significant than before due to factors such as changes in the structure of the labour market and technological development (Bank of Finland 2012).

Henrik Lönnqvist is Research Director at the City of Vantaa. Minna Salorinne is Researcher at City of Helsinki Urban Facts.

The unemployment data are based on the employment statistics of Ministry of Employment and the Economy. The data have been obtained from the StatFin database of Statistics Finland and the Toimiala Online information service of the MEE, as well as from a special order from City of Helsinki Urban Facts. 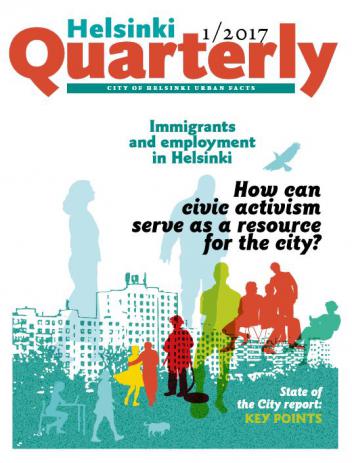