Migration between the municipalities of the Helsinki region has been busy in the 2000s. As is the case in other urban centres, it has been typical for Helsinki that the people moving into the city are young people with relatively low income, while those moving out are older and have often established themselves in employment. This has been seen as a threat for the city's tax revenue. Or is the reality more complex, and what is the effect of the economic downturn on the migration patterns?

Moving is selective in terms of the age and other characteristics of the movers. 18- to 30-year-olds are the most mobile. At this age people typically go through changes in life, having to do withstudies, employment, relationships or family formation. These changes are mirrored by housing needs and possibilities, and the resulting reaction is to move. The migration presents itself differently in different municipalities and residential areas. This is due to the variation in housing stock, services, taxes and payments, environment and population structure between areas.

There are also numerous other factors that affect migration and the choice of new residence. In the Helsinki region, young adults tend to move to small rental flats either in the inner city or in the suburbs. Families with children often move to the fringes of the urban area, where larger and more affordable housing is available. The increasing migration flow consists of people at or near retirement age moving from areas dominated by single-family houses to flats in the city centres.

Moving is also selective in terms of income level. The differences in income level among the moving population have raised the question of whether or not the effects of migration accentuate regional differences. The differences in income are presumed to weaken the revenue base of the “losing” municipalities and cause residential segregation through the concentration of low-income residents in certain municipalities. International research literature presents plenty of evidence of the economic and social segregation processes of selective migration. The development of Detroit and the surrounding cities since the 1970s is the most famous example (Glaeser 2010).

Hannu Kytö and Monika Kral-Leszczynska (2013) studied migration in Finland between 2001 and 2010 and found that the central cities of urban areas with their diverse labour markets attract both internal migrants and immigrants. Surrounding municipalities, which have more affordable housing markets, draw the best tax payers but also have the largest service demand. The study indicates that, as a result of net migration, Uusimaa attracted about 50 per cent of the net incomeof all municipalities with migration gain – although, Helsinki lost the most income among all the municipalities due to net migration. According to Timo Aro (2013a, 2013b), migration that is selective in terms of income level is shaping the spatial structure of Helsinki and the entire metropolitan area towards incremental segregation. This conclusion is based on the comparison of average income levels between municipalities and areas. Broberg's (2008) conclusions indicate the same result for Helsinki-Uusimaa.

It can be asked whether any far-reaching conclusions can be drawn from statistical data on individual years with regard to the effects of migration on income differences between municipalities. Annual statistics describing the average income levels of movers and the net income revenue of municipalities consolidate various groups of residents moving between municipalities. The low-income group, in particular, contains people with ‘temporary’ and ‘long-term’ low income. The majority of low-income residents moving to Helsinki are students or fresh graduates who have low income because they are young and unemployed. On the other hand, Helsinki also attracts movers who have been excluded from education and employment.

Domestic migration has caused Helsinki to loseincome revenueto other municipalities annually in the 2000s, when viewed in terms of the taxable income of the migrants each year (Figure 1). The cities and groups of municipalities in the Helsinki region deviate from each other greatly with regard to the annual relocation of mover income. Helsinki stands at one extreme: it has suffered 'loss' due to migration. At the opposite extreme are the rural municipalities in the outer parts of the region (Kirkkonummi, Mäntsälä, Nurmijärvi, Pornainen, Sipoo, Tuusula and Vihti), which have gained in terms of the taxable income of movers. Espoo, Vantaa and the smaller cities in the outer-lying parts (Hyvinkää, Järvenpää and Kerava) fall in the middle of these two extremes – they have had net in-migration of income or the balance has been near zero.

Between 2002 and 2011, however, there has been a dramatic shift in the income relocation related to domestic migration. Until 2007, the loss suffered by Helsinki varied within €200–300/resident while the gain of the surrounding rural municipalities was €400–500/resident. Espoo, Vantaa and the smaller cities also gain revenue, with some exceptions.

The turn took place during the first year of the international financial crisis in 2008, which took a heavy toll on the housing markets of Helsinki, for example. In 2008 and thereafter, the differences between the cities and groups of municipalities in the Helsinki region have narrowed: Helsinki's loss and the gain of the surrounding municipalities have decreased, and the result of the intermediate cities has fluctuated on both sides of zero.

In 2011, Helsinki and the surrounding cities suffered slight losses (-€60/resident and -€40/resident, respectively). The surrounding rural municipalities gained a profit (€210/resident), as did Espoo to a lesser degree (€12/resident), with Vantaa's result standing near zero.

Age and income distribution of migrants

The income relocationsrelated to migration are closely connected to the age of the movers and, as a result, to their main occupation, employment and income level. A particularly large number of young people between 18 and 24 years of age move to Helsinki from other zones in the region and from outside the region. Espoo and Vantaa are target areas for young adults, but young people are also moving out of the areas of these cities that are dominated by single-family houses. As regards the surrounding rural municipalities, 18- to 24-year-olds move out but over 25-year-olds move in. (Figure 2)

The income level difference varies according to age group. In-migrants aged under 45 have a lower income level than out-migrants, but for those over 45 years of age, the relationship is the opposite. If the average incomes of in- and out-migrants are standardised for age using the age distribution of all movers, the difference in income level becomes marginal. From this we can conclude that Helsinki's loss due to domestic income relocation is based entirely on the differences in the age distribution of in- and outmigration – it is not a case of Helsinki attracting specifically low-income residents and losing high-income residents in domestic migration across all age groups.

Age group-specific income differences have remained fairly stable during the 2000s. However, there has been a dramatic change in the numbers of migrants. In domestic migration, Helsinki's loss of people aged 25–39 especially to other areas in the Helsinki Region increased significantly in the early years of the past decade. Since a turnaround in 2008, the loss has continued to decrease systematically. At its highest, Helsinki's migration loss of people aged 25–39 was -4,100 in 2003, but in 2011 the number had dropped to 960 and in 2013 a slight gain was registered (65 people). The decrease of migration loss in these age groups explains almost the full scope of the decrease in Helsinki's net income revenue in relation to domestic migration from 2003 to 2011 (Figure 1).

Overall, the impact of the income level of movers on the average income level of a municipality and on tax revenue is a long-term process that is affected by the development of employment and income level in the years following the move, and the time spent living in the municipality in question. Many young adults who move to Helsinki initially have low income but their income level then increases in the coming years, together with their employment rate. For Helsinki's tax revenue base, the development of the migrants' income in the years following the move is much more important than their initial income at the time of the move.

Employment and income level of immigrants

The general income level and differences in income level between municipalities is also affected by immigration and emigration. Immigration has been the most important element impacting population change in Helsinki and the entire Helsinki Region in the 2000s. In 2010, the employment rate of immigrants was one-third lower than that of the entire population or domestic migrants in Helsinki and in the Helsinki Region. The low employment rate is mirrored by the income level, although comparing the income level of immigrants with domestic migrants is problematic since, for the year of immigration, the income registered in statistics normally only covers the part of the year following the move.

Over half of immigrants (56 per cent) to the Helsinki Region have moved to Helsinki in the 2000s, whilst Helsinki's share of the entire region's population is 44 per cent. Correspondingly, the majority of low-income immigrants outside the workforce have ended up in Helsinki. However, the immigration flow has levelled off in recent years: in 2012, Helsinki's share fell down to 51 per cent from the peak of 59 per cent in 2007.

The effect of migration on the average income level of residents and municipal taxes in the long term is a complex process, also affected by the development of the migrants’ income in the years following the move. Which municipalities are ‘winners’ or ‘losers’ cannot be directly determined on the basis of the annual net income revenues. Negative net income revenue does not necessarily mean the municipality will become poorer in relation to other municipalities when measured in terms of average income level. The long-term effect is dependent on the age structure of the movers, age-specific income level and the duration of residence in a municipality.

In Helsinki, the migration gain of young adults compensates for losses in tax revenue due to migration fairly well, since the income of young adults tends to increase rapidly in the years following the move. However, for balanced development, it is important that the migration loss of the age group with the highest employment rate does not increase excessively. In the past decade until 2007, Helsinki's annual migration loss of people aged 25–39 amounted to several thousand people. At the same time, the concentration of immigrants out of work or outside workforce in Helsinki decreased the city's income level. These factors had a negative effect on Helsinki's relative income level. On the other hand, in the early years of the current decade, migration has been more balanced for Helsinki. Even though the income level of in-migrants is still lower than that of out-migrants, the increase in employment and earnings among young incomers in the years following the move balances out the apparent loss. 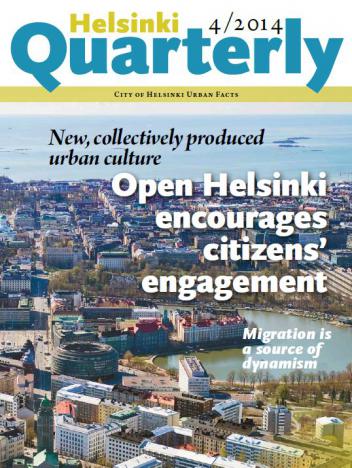