Number of children on the rise particularly in Inner Helsinki

For the first time in fifty years, a considerable part of the growth in the child population of Helsinki occurs in the existing housing stock and infill areas. Today, there are more children in the city than at any time since the mid-1970s. This article looks at the development of the number and proportion of 0–15-year-olds in Helsinki’s population between 1962 and 2017.

In the following, we examine the extent to which the number of 0–6-year-olds and 7–15-year-olds has increased in Helsinki in the last few years, and in which parts of the city. Apart from the numbers by district and the relative change, we also look at the proportion of children in neighbourhoods and attempt to determine what kind of neighbourhoods have seen the strongest increase. The foremost observation is that the vast majority of this growth in recent years – as opposed to earlier periods – has occurred in Inner Helsinki and its vicinity, in the existing housing stock and infill development areas.

Development of the number of children in Helsinki: four phases

Rapidly falling birth rates was a common phenomenon in industrial countries such as Finland in the 1960s and 70s. Background factors included improved and more widespread contraception, higher female attendance in education and work and the increased predominance of the one- or two-child family model.

Another factor that reduced Helsinki’s child population was the rapid realisation of housing development projects in the 1960s and 70s in the neighbouring municipalities, Espoo and Vantaa. Old dwellings in Inner Helsinki were increasingly seen as inadequately equipped – and the urban environment as unsuitable for children – in comparison with the new suburban dwellings and environments (Hankonen 1994).

During the second phase, between the late 1980s and the late 90s, the number of children increased again. This was most evident from 1992 onwards. In 1999, there were 89,041 children aged 0 to 15 in Helsinki. During the economic depression in the early 1990s, birth rates rose despite an unprecedented increase in unemployment (Lainiala 2014). In the depths of the depression, in 1993, the average unemployment rate reached 18.7 per cent in Helsinki, with 49,900 unemployed job seekers (Lönnqvist & Salorinne 2016). The highest local unemployment rates, over 20 per cent, were seen in the eastern and northern districts of Helsinki, where income and education levels were low and where a significant share of the residents worked in fluctuating job sectors such as construction or services.

In May 1993, the proportion of women among the unemployed in Helsinki was 37 per cent. Possible reasons why women were less often unemployed than men include the assumption that they chose to focus more on education, family and children as unemployment started to rise in the female-dominated social, health and service sectors. These choices would have led to a rise in birth rate. In the early 1990s, it became more common for families to have a second or third child than it had been earlier. (Rotkirch 2010, Lainiala 2014, Miettinen 2015). Uncertainty about employment and economy also reduced people’s readiness to manage their debts (Kiander & Vartia 1998, 289–296), and made families with children less apt to seek a larger home in suburbs or nearby municipalities.

In the third phase, the number of children started decreasing again in Helsinki (more specifically in the year 2000), and this trend continued until 2008. The national economy grew and, by the end of this phase, unemployment in Helsinki had fallen to around 6 per cent (Lönnqvist & Salorinne 2016).  In the early 2000s, the improved economic and employment situation may have allowed many families with children to satisfy their pent-up housing needs again. People began to move to the suburbs and neighbouring municipalities almost as much as in the 1970s (Vuori & Nivalainen 2012). In the early 2000s, authorities in Helsinki were concerned about families with children moving to the outer Helsinki Region (this trend was referred to as ‘the Nurmijärvi phenomenon’) and the potential negative consequences for the city’s tax revenues. Helsinki began to draw up plans to incorporate land in the southwest corner of its neighbouring municipality Sipoo, which would allow it to build housing for tens of thousands of new residents in the future.

This increase has been explained by the economic downturn that began in 2008 and resulted in higher unemployment – as in the 1990s. By the end of 2015, the number of jobless in Helsinki had reached 41,700, which was more than in 1992, the second worst unemployment year of the 1990s depression. The hypothesis is that the economic situation would have urged people to put off their plans to move to other municipalities in the Helsinki Region. Another explanation sometimes proposed is that families with children are increasingly interested in inner city living regardless of economic circumstances (Boterman et al. 2010, Juday 2015, Lilius 2016, Mustonen & Lindblom 2016).

Increasing immigration during the fourth period accounts for a part of the rise in the number of children – but not a particularly large share. The three largest groups of residents with a non-native mother tongue – Somali-, Russian- and Estonian-speakers – together accounted for one-quarter of the increase in the period, amounting to 2,878 children.

The proportion of children in the population has not varied as much as their total number. It has also followed a more clearly declining trend. Between 1962 and 2016, the proportion of 0–15-year-olds was lowest in 2012: 14.4 per cent (see Figure 1). Since then, it has been growing somewhat, to reach 14.9 per cent in 2017. This was, however, a clearly smaller proportion than the last peak, in 1997, when 0–15-year-olds made up 16.5 per cent of Helsinki’s population.

This means that the adult population in Helsinki has grown more significantly than the child population since the 1960s – with the exception of slight increases in the child population in the early 1990s and mid-2010s. This development is linked to factors such as migration gain, declining numbers of families with children and the rise of solo living. Nevertheless, changes in the number of children are important information to the providers of services for children and families.

The exceptional growth in the child population during the fourth phase – an average of about 1,000 children per year – has created a need to increase the capacity of day care centres and schools. This has proved challenging within in the existing housing stock – notably in Inner Helsinki, where the recent growth in the number of children has come as a slight surprise.

There is often a large number of children in newly built housing areas with a good provision of sizeable dwellings attracting families. In such areas, even one third of the inhabitants may be children. As an example, children made up 30.3 per cent of the population in Ruoholahti in 1995, when this residential area had recently been completed. After the initial phase, the number and proportion of children gradually fall. In 2017, children made up only 16.4 per cent of Ruoholahti’s population. However, the growth in child population in the Southern and Central major districts seems to come only partly from new-built areas.

In 2017, the Central major district had a child population of slightly over 9,200, which was roughly one third more than in 2008. Of this growth, 75 per cent occurred in either new housing in the Arabianranta, Hermanninmäki or Kalasatama areas or in infill developments in Vallila, Vanhakaupunki or Vilhonvuori. An increase of some 200 children was also seen in the Linjat and Käpylä sub-districts where hardly any new dwellings were built (see Figure 4). Relative change in the number of children was great both in new-built areas in Arabianranta and Vallila as well as in older neighbourhoods where the numbers of children had initially been low, such as Linjat and Alppila.

At the beginning of 2017, the Southern major district had a child population of almost 14,000, which was over one quarter more than in 2008. The number of children increased most in the areas of Lauttasaari, Jätkäsaari, Etu-Töölö, Taka-Töölö, Kamppi and Punavuori (Figure 5). In the sub-district of Jätkäsaari, a development area still largely under construction, the number of children grew by almost 600 during the period 2008–2017; nevertheless, their proportion in the population fell by almost five per cent, down to 15.8 per cent. In Lauttasaari, the child population increased in both the infill development in Vattuniemi and in older areas. In Ruoholahti and (to some extent) Suomenlinna, both the number and proportion of children decreased. Nonetheless, Ruoholahti still had the highest proportion of children in the Southern major district: 16.4 per cent.

It is notable that the vast majority (70 per cent) of the growth in the child population in the Southern major district – amounting to 3,600 – occurred in existing housing stock. This was despite the fact that the numbers of children grew fastest in infill buildings in Lauttasaari and the new development in Jätkäsaari. The proportion of children also increased most strongly in existing housing stock in Punavuori, Töölö, Kamppi and Kruunuhaka (albeit not in Lauttasaari).

In the 2010s, during the most recent growth phase, the child population has grown especially in Inner Helsinki and its immediate vicinity. This is partly due to brownfield developments in former harbours and industrial sites in the inner city. Regardless of this intensive residential construction in inner Helsinki, another clear new trend is that a considerable part of the increase in child population occurs in existing buildings or infill developments – for the first time in fifty years. This new situation implies challenges in finding suitable facilities for services for children and youth. It also raises the question why the strongest increase in the child population in recent years has occurred in the old areas in southern Inner Helsinki.

Is the increase linked to the economic downturn in 2008 and the resulting uncertainty on the labour market, or are there other reasons? Have the large development projects in Inner Helsinki made families with children also more interested in old dwellings in the inner city – regardless of economic ups and downs? Or have there been work- or lifestyle-related changes that have made city-centre housing attractive? What does settling in the inner city imply for families’ choices of child day care and schools? We asked these questions – and many others – in our recent interview survey of families with children in the inner city districts of Punavuori and Kruununhaka (Kohtamäki & Niska, forthcoming), the results of which will be published soon. 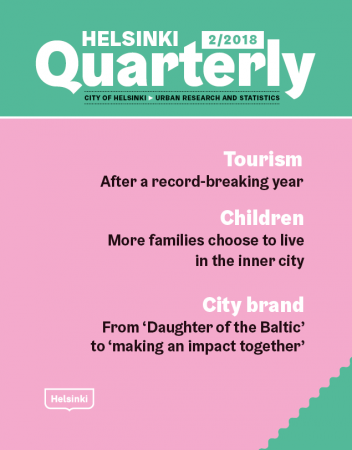